‘You say the wrong thing, you lose your position’ Guardian columnist reveals he was fired over tweets criticizing Israel

You can’t criticise the people who control you and your country. The one group of people you are not allowed to even mention...amusing how these leftists are now getting their speech removed. They are COMING FOR EVERYBODY, does to matter what side you are on. They probably won’t mess with marxist teachers though, they are good puppets teaching kids marxism and lies about history.

Columnist Nathan J. Robinson has revealed that the Guardian fired him over a sarcastic tweet about US aid to Israel, even though he deleted it and agreed to never bring up the issue in the hope of keeping his job.
“The moment I irritated defenders of Israel on social media, I was summarily fired from my job as a newspaper columnist,” Robinson wrote on Wednesday in Current Affairs, the magazine he edits.
His columns had appeared in the Guardian since 2017, and Robinson says he had only been “spiked for content reasons” once – when he criticized Democrat Joe Biden over his son’s business ties, during the 2020 US presidential election.

One of the most serious threats to free speech is the silencing of criticism of the government of Israel. I have now found this out the hard way, having just been fired as a Guardian columnist for sending a tweet about US military aid to Israel https://t.co/EEfLqjY1IM
— Nathan J Robinson (@NathanJRobinson) February 10, 2021
Click to expand...

What actually got him fired, however, was a pair of tweets criticizing Israel. Angry over the amount of US aid to Tel Aviv in the omnibus spending bill bundled with the coronavirus stimulus back in December 2020, Robinson “sarcastically” tweeted that “it’s the law” that “US Congress is not actually allowed to authorize any new spending unless a portion of it is directed toward buying weapons for Israel.”
In a follow-up tweet, he explained it’s not actually the law, but “at least so customary as to be functionally identical” to make sure it was “100 percent a joke” with no room for misinterpretation.
Then he got an email from Guardian US editor John Mulholland, quoting someone who called the tweets “clearly anti-Semitic” and something that “informs murderous hatred,” demanding the deletion and apology. 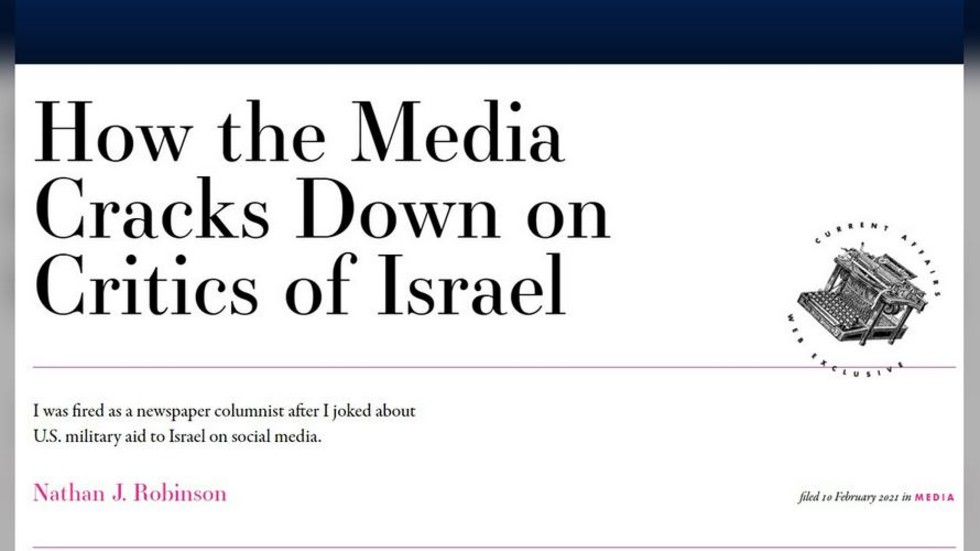 ‘You say the wrong thing, you lose your position’: Guardian columnist reveals he was fired over tweets criticizing Israel

Columnist Nathan J. Robinson has revealed that the Guardian fired him over a sarcastic tweet about US aid to Israel, even though he deleted it and agreed to never bring up the issue in the hope of keeping his job.

YES, mentioning that the American Government/Military supports israel more than their own people is so so very anti semitic, yet it is true. Truth equals anti semitism.

We have no business supporting Israel. They sold our secrets to Chinese, Pollard. Palestine would be a more worthwhile ally. WE could actually seek ME peace. Americans are supporting free housing and college for Israelis.
Reactions: Stop Being Delusional
Share:
Facebook Reddit Email Share Link