This is a developing story. Mainstream media pulls original story of Australian sailors on HMAS Sydney suffering widespread adverse reactions to COVID19 vaccinations. Sanitized version refers only to “mild side effects” despite the fact the ship’s crew needed hospitalization.

So, whenever the mainstream media conspires to quietly ‘disappear’ web pages of a story it has already reported on you can bet something far bigger and worrisome is being covered up.

In this latest case, the UK’s Daily Mail yesterday pulled a story from their pages about adverse COVID SHOT reactions among the crew of an Australian war ship.

Direct from Australia, a valued contact told us by email:
“Our health minister is still in the hospital from the day after he had his injection! Not a word about the navy hospitalisations. What a way to take out a country’s military… In just one jab!” Our contact refers to the story earlier this week of Australian Health Minister, Gregg Hunt, who was taken seriously ill in a “critical condition” after he received his dose of the untested, experimental vaccine. In a statement on Tuesday evening his office stated that Minister Hunt had: “been admitted to hospital with a suspected infection, he is being kept overnight for observation and is being administered antibiotics and fluid.”

Hunt’s story, like this navy frigate shocker, has been toned down for the masses. When we attempted to locate the reference to HMAS Sydney in the Daily Mail it had disappeared. Even our diligent search on the reliable Way Back Machine took us to an unrelated article. Our contact explains:

“I spent quite a bit of time searching through their headlines, but couldn’t find the story. Wouldn’t be surprised if it has been deleted, though the link is still appearing … makes me think it was probably quickly taken down after initial publication.

Navy sailors hospitalised after being given Covid vaccinations 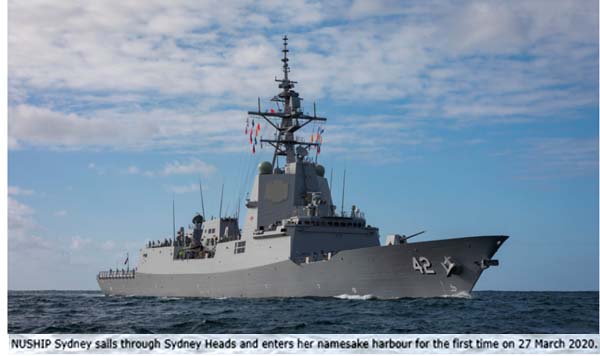 This is a developing story. Mainstream media pulls original story of Australian sailors on HMAS Sydney suffering widespread adverse reactions to COVID19 vaccinations. Sanitized version refers only to “mild side effects” despite the fact the ship’s crew needed hospitalization. This latest setback...

principia-scientific.com
A number of navy sailors have been hospitalised after being given Covid-19 vaccinations on the HMAS Sydney. Defence sources confirmed some HMAS Sydney crew members were admitted to St Vincent’s …”

The ship ceased military deployment in 2015 and was decommissioned on 7 November. The frigate was replaced in service by a Hobart-class destroyer. The ship was intended to be used for scrap in 2017 but the latest report from ABC News (below) suggests it has remained in service.

After Big Media censors (vaccine propagandists?) did their work there are few facts left of what really occurred aboard ship apart from a tweet from ABC news offering a brief, toned down version. Andrew Greene reports:


There are other reports coming in from around the world of adverse reactions, even deaths, from the rushed through coronavirus vaccine (see here). Last month, California Halted COVID Vax: with Adverse Reactions At ‘Unusually High Number.’


Perhaps it is not surprising that the Aussie government has now announced it is “walking away” from plans for the mass vaccination of the population.
So, when does coincidence no longer remain as mere coincidence? Health Minister Hunt in ‘critical condition’ after his COVID jab; the Aussie government backing away from mass vaccination and now the crew of HMAS Sydney hospitalized over ‘mild reactions’ from their coronavirus jabs. So, the old saying ‘no smoke without fire‘ comes to mind when reading the legacy media’s sanitized version of the warship’s predicament, as it tells readers:

“Also on Thursday, the Department of Defence confirmed members of HMAS Sydney experienced “mild side-effects” after receiving the Covid-19 vaccine.

The ABC reported that crew members were admitted to St Vincent’s hospital in Sydney as a precaution after experiencing side-effects from the vaccine.

In a statement, the department said no members of the ship were currently in hospital, but would not comment on whether any crew had previously been admitted.
A Defence spokesperson said the ship’s crew had voluntarily received the vaccine ahead of a deployment to North America. The ship sailed with its full crew on Thursday.

“In accordance with Department of Health guidelines, members of the ship’s company were encouraged to report to medical personnel if they were feeling unwell after their vaccination. Some members experienced mild side-effects, which were resolved shortly after reporting,” a Defence spokesperson said. “It is not unusual to experience mild side-effects after any vaccination. Serious allergic reactions are rare.”

Earlier, Australia’s chief medical officer, Prof Paul Kelly, told the Senate inquiry he had been notified of adverse events, but aside from “a few cases of anaphylaxis” there was “nothing untoward” in side effects from the vaccine.”

Curious fact in the HMAS Sydney story: the sailors were taken to hospital for “mild side-effects.”

The reference to anaphylaxia is notable because it is linked to a worrisome number of deaths occurring soon after vaccination, as we reported in Is Post-COVID Vaccination Death Just Coincidence?

Our ‘friends’ in the mainstream media have been too quick to tell us deaths are assumed to be only “coincidentally” associated with vaccination before all the evidence is in. This raises an obvious question: Is the assumption that the experimental COVID-19 vaccines are never the cause of death scientifically justified or is it a symptom of bias?

***If any readers have further information to add to this developing news please let us know.***