I knew he would do this. Undo all the good Trump has done. Bunch of Extreme muslims infiltrating America like they have been doing in Europe. Children, women raped and killed. Many beheadings. Many kids being beaten for being non muslim. Many terrorist acts. And you won’t be able to mention it.

REVEALED: Biden will reverse multiple Trump policies including his 'Muslim travel ban' and will rejoin Paris Climate Accord on his FIRST DAY in office - before 'heading to UK for his first overseas trip'​

Biden will be keeping busy during the first days of his presidency after vowing to enact several executive orders right away while on the campaign trail.

Among the promises Biden has made include mask mandates, striking down the travel ban on predominantly Muslim countries, and having the United States rejoin the Paris Climate Accord.

While it's an ambitious plan, Biden plans on signing a handful of executive orders on his first day in office, per a memo from incoming chief of staff Ron Klain.

One of the executive orders Biden will sign is a reversal of the travel ban, which first affected people from Iran, Iraq, Libya, Somalia, Sudan, Syria, and Yemen when it was implemented in January 2017.

Biden also has listed a thorough immigration policy and a $1.9 trillion coronavirus relief bill (White people not included in this btw) among his top priorities.

Biden previously said he would roll back the Migrant Protection Protocols on his first day, which turn away many Central American refugees at the Mexican border.

Whether or not he does so could become critical in the coming days, with reports of Honduran migrants working their way through Guatemala and slowly towards the US border emerging. 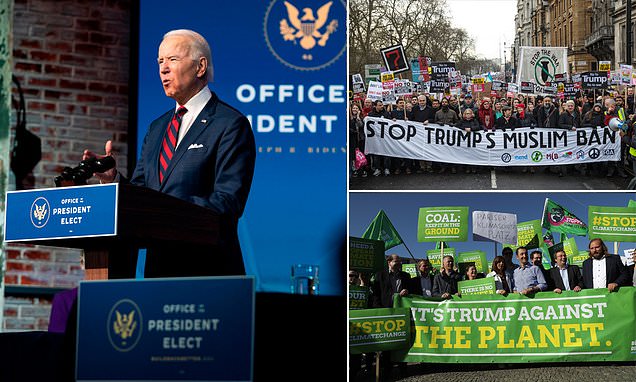 Joe Biden will be keeping busy during the first days of his presidency after vowing to enact several executive orders right away while on the campaign trail.