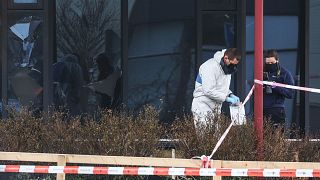 Forensic investigators search for evidence after an explosion at a Covid-19 testing centre in the town of Bovenkarpsel -
Share this article ----- https://www.euronews.com/2021/03/03/explosion-near-covid-19-test-centre-in-the-netherlands