WATCH TO LEARN THE FACTS OF THAT DAY, EVERYONE WAS IN DALLAS, A FEW WERE OUTSIDE THE SCHOOL BOOK DEPOSITORY BLDG (GHWB, DEAN RUSK?) PLANES WERE IN AIR W/BRIGADE (ABORT/TEAM) TO QUASH INSURRECTION. AUSTRALIA PUBLISHED THE ASSASSINATION HOURS BEFORE IT ACTUALLY TOOK PLACE @12:30PM DALLAS TIME. ALL TELEPHONE COMMUNICATIONS IN AND AROUND WASHINGTON, DC WERE SHUT DOWN FOR THAT EARLY AFTERNOON TIME PERIOD.

THE TURKEY SHOOT WAS ON.

HE WAS THE SITTING PRESIDENT OF THE UNITED STATES OF AMERICA. HE WAS YOUNG, FULL OF LIFE, AS A YOUNG NATION WAS COMING TOGETHER AFTER 100 YEARS OF CIVIL STRIFE. HE WAS A SKUMBAG, A DIRTY POLITICIAN/WOMANIZER OR EVEN A RAPIST (16/17 Y/O VICTIMS). WAS GOING TO BANKRUPT AMERICA BY SHUTTING DOWN THE MILITARY INDUSTRIAL COMPLEX AND WITHDRAWL FROM SOUTHEAST ASIA. THE RATS ALREADY OWNED ALL THE COMPANIES IN THE KNOW. ALL MILITARY COMMITMENTS FOR SOUTHEAST ASIA, WAS APPROPRIATED IN CONGRESS UNDER THE EISENHOWER ADMINISTRATION. THE ITALIAN CATHOLICS DIDN'T LIKE THE IRISH CATHOLIC POTUS, ALL KEY PLAYERS HAD ITALIAN BLOODLINES.

Six shooters who participated in the assassination of President John F. Kennedy, including three with ties to the Central Intelligence Agency (CIA), were named by a prominent critic of the Warren Commission Report (WCR). Remarkably, Lee Harvey ...

www.scoop.co.nz
As for the motivation to kill JFK, Fetzer noted that he was threatening to shatter the CIA into a thousand pieces, that the Joint Chiefs believed he was soft on communism, that the Mafia was unhappy because Attorney General Robert Kennedy was cracking down on organized crime, that he was going to abolish the FED and cut the oil depletion allowance.

"more than 15 indications of Secret Service complicity in setting Kennedy up for the hit": two agents assigned to the President's limousine were left behind at Love Field; that JFK's limousine, which should have been in the middle of the motorcade, was put first; that the motorcycle escort was reduced to four and instructed not to ride ahead of the limousine's rear wheels; and after the first shots were fired, the driver pulled the limo to the left and stopped.

an AP photograph that appears to show Oswald standing in doorway of the book depository at the time JFK was shot. It has been compared with Oswald photographs taken later that afternoon in Dallas police headquarters. When questioned, Oswald told Dallas homicide detective Will Fritz that during the shooting he had been standing with Bill Shelley, one of his supervisors, in front of the building.​ THERE MUST'VE BEEN A FEW DOZEN CIA PERPS GATHERED IN FRONT OF THE TSBD, THE WORD WAS OUT FOR MONTHS, "ITS COMING DOWN" THOSE WERE THE KEY WORDS. OBVIOUSLY, THE WORLD'S INTEL AGENCIES WERE ALL IN DEALY PLAZA, MANY ALONG SIDE W/CIA PERPS. EVERYBODY WAS IN DALLAS' DEALY PLAZA 58 YEARS AGO!~​
Last edited: Nov 22, 2021
T

I don't care what you thought of him or his policies, it was the beginning of violence and aimless revolt (the Hippie movement) which largely led to communism. I remember making fun of 'law and order'.
T

THE ITALIAN CATHOLICS DIDN'T LIKE THE IRISH CATHOLIC POTUS, WHY IS THAT?

THE RABBI WAS COMING TO AMERICA FROM LONDON (WHEN THE AMBASSADOR RETURNED IN DISGRACE FROM THE COURT OF SAINT JAMES), CURSED JOEY THE 'BOOTIGGER' "ANTI-SEMITE", 'THE SINS OF THE FATHER ARE VISITED ON THE SON'

Roscoe White joined the United States Marines and left for Japan in August, 1957. He was stationed at Atsugi and worked on the U-2 project.
White joined the Dallas Police Force in September, 1963. Soon afterwards, his wife Geneva White, claimed that she overheard her husband and Jack Ruby plotting the assassination of John F. Kennedy.

White left the police force and was employed by a company called M & M Equipment. On 23rd September, 1971, White and a fellow worker, Richard Adair were both badly burnt in an industrial fire. Adair recovered but White died the following day.

On 4h September, 1990, Roscoe's son, Ricky White, revealed to a meeting at the University of Texas that his father had been involved in killing the president: "The diary said after my father shot the President he handed his 7.65 Mauser to the man standing beside him, hurled over the fence, took the film from the military man, whirled around the fence and went through the parking lot."

White added that Lee Harvey Oswald had also taken part but had not fired any of the shots. White then went on to kill J. D. Tippit. Ricky White claimed he had got this information from his father's diary. This apparently had been taken away by the Federal Bureau of Investigation. President Kennedy & family were nothing like them.
The Bloodline they could never Be=PURE
A Purity which they Feared the Most.
God himself will come to Show just how
"HOLY" The Kennedy's are indeed

DOESN'T THIS SOUND FAMILIAR, AGENCY INFIGHTING AND BACK STABBING 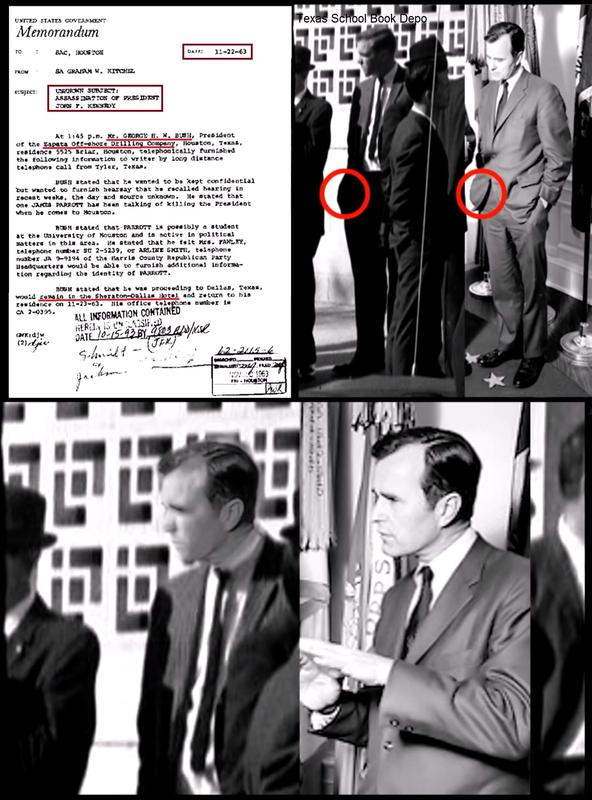