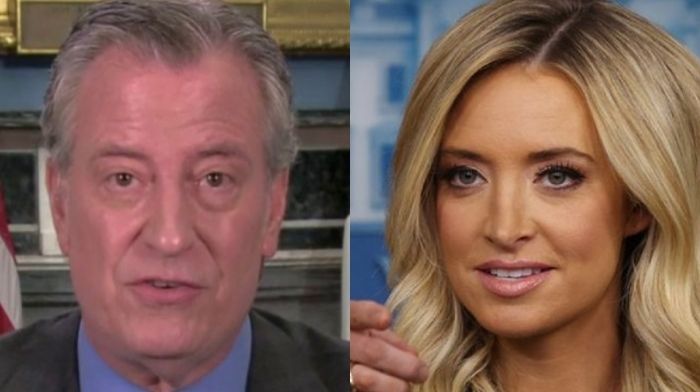 White House Press Secretary Kayleigh McEnany held nothing back on Tuesday as she blasted the “absolute catastrophe” of mail-in voting in New York,

White House Press Secretary Kayleigh McEnany held nothing back on Tuesday as she blasted the “absolute catastrophe” of mail-in voting in New York, describing it as a “dark omen” for the November election. She also set her sights on New York City Mayor Bill de Blasio (D), pointing out that he is having an “awfully hard time” taking on violent crime.

McEnany explained that President Donald Trump “thinks the mayor and the governor should work together to take control of the streets of New York City, where in some places we’ve seen a 600 percent surge in violence over last year.”

“It’s ultimately the power of the mayor to enforce, and the governor to enforce the police power of their states — that power rests with them, but they can partner with the federal government in the event they’re unable to enjoy the violence in their cities,” McEnany added, according to the New York Post. “And that’s certainly what we’ve seen from Mayor de Blasio, who seems to have not a hard time criticizing police officers but an awfully hard time controlling the streets of New York City.”

Not stopping there, McEnany ripped state leaders of New York over their continued confusion and delay over the results of the recent primary elections.

“There’s a Wall Street Journal article just out today and it talks about the dark omen for November and the absolute catastrophe in New York City — that we are a month into the election after the voting, and we still don’t know the winners of some of those races,” she said. “And Governor Cuomo decided that he would pre-pay postage for the ballots and what that meant was that the post office didn’t put a postage stamp noting the date of the ballot, and so as they’re collecting these ballots.