Lin Wood Going To Spill Their Secrets, Goes All In…

The breakdown of attorney L. Lynn Wood's relationship with his longtime client, casino mogul Steve Wynn, has been revealed in a new report, as Wood faces increasing scrutiny for his incendiary tweets leading up to the attack on the U.S. Capitol last week.

Wood and Wynn, both longtime supporters of President Donald Trump, apparently haven't spoken except through attorneys since last March, and Wood is suggesting he will spill Wynn's legal secrets in a legal battle, the Wall Street Journal reported on Tuesday.

Best known for defending security guard Richard Jewell in defamation cases against false claims he was the 1996 Olympic bomber, Wood apparently blamed Wynn for derailing his push for Trump to posthumously award Jewell the Presidential Medal of Honor.

It comes after Wood was banned from Twitter last week after suggesting Vice President Mike Pence should face execution by firing squad for treason, while a Delaware judge kicked Wood off a case there this week for spewing a 'toxic stew of mendacity, prevarication, and surprising incompetence.' 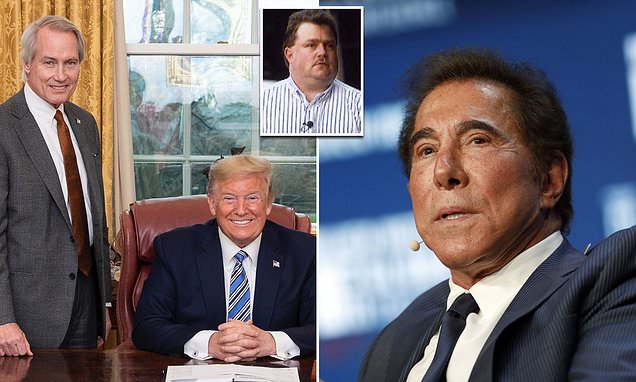 Wood and Wynn, both longtime supporters of Trump, apparently haven't spoken except through attorneys since last March, and Wood is hinting at spilling Wynn's secrets in a legal battle.

Lin Wood is either crazy, or he is right. I'm just crazy enough, and have been around long enough to think he is right. I suppose we shall soon see. Jazon
Toggle signature
JAZON PANTHER. Ph.D.
Nec Ossa Solvm sed etiam Sangvinem.
ΤΩΙ ΣΟΦΩΙ ΞΕΝΟΝ ΟΥΔΕΝ
INCERTI AVCTORIS
Reactions: Pauletteph, GA Patriot, TURKALURK and 3 others

Jazon Panther. Ph.D. said:
Lin Wood is either crazy, or he is right. I'm just crazy enough, and have been around long enough to think he is right. I suppose we shall soon see. Jazon
Click to expand...

He is big Q supporter, so idk. He sounds crazy most of the time imo. And Q I do not trust at all. Think he, she, it is a fbi psyop.
Reactions: Pauletteph

I think Lin is serving his purpose. We shall see.
Reactions: Pauletteph, Nonnie, Sandy Johnson Clark and 2 others

I found out several times by experience that when you are telling strange truth people tend to think you are crazy. Most people cannot accept anything that falls outside their definition of "reality"; but for most people that is a very small circumference. You have to do more than "think outside the box" you have to throw away the box and consider all possibilities based on the evidence. Evidence is anything that allows you to answer your questions, and that potentially includes anything in the world whatever. Thinking is the key, not following the talking heads who spin everything without even being there. I was at the rally in Washington; I was at the top of the steps. It was the most peaceful and polite throng of people I was ever among in my life. I was with a lady in a wheelchair as we went up the steps and two monster flags went over top of us. All of the things that shd not have happened came from elsewhere. I asked people dressed all in black or in military gear a number of times if they were "one of us". It took a while to realize what was going on, but you cd feel the heat and pressure stepping up. I was peppered four times and pushed down, dragged, and carried away twice. Most of the police were not trying to hurt us. I met a guy on the subway on the way back to the hotel who showed a hand that was bruised and swollen; I found his picture several days later on the internet identified as BLM. At the hotel a friend had the news on, and the talking heads, who weren't even there, were already spinning it beyond recognition. It was so wrong. Why not ask people who were there! No, they know everything from confused video clips! Party line. In my opinion this was the equivalent of Bunker Hill or Ft. Sumpter, except for the fact that those were military engagements; perhaps more like the march in Selma, Alabama, or the people lying on roads and railway stations in Gandhi's peaceful protests. Remember the words of Harrington: Treason doth never prosper: for if it prosper, none dare call it treason!
Toggle signature
JAZON PANTHER. Ph.D.
Nec Ossa Solvm sed etiam Sangvinem.
ΤΩΙ ΣΟΦΩΙ ΞΕΝΟΝ ΟΥΔΕΝ
INCERTI AVCTORIS
Reactions: Nonnie, Sandy Johnson Clark, Kassandra M. and 3 others
F

Dr Panther....logic reigns with those who have a conscience and a brain....the combination of the two have served me well in life....thinking OUTSIDE THE BOX.... is...as you said....only half the equation....the other half is throwing the box away and making certain that there are NO SCRAPS....anywhere to be found.....that would give you the idea that your thought resembles that which was just tossed.
We are in the midst of living ON THE FARM....in this country.....as we are absolutely SURROUNDED BY LEMMINGS....these poor..sad...individuals have NO IDEA how to break from group think...or for that matter...construct and STAND on a thought of their own...,that is why...I thank god...everyday...I was that....strong willed...difficult...child.....whose path and drumbeat...was MY OWN....sorry mom and dad...oh...and thank you dad...FOR SITTING ON ME...and keeping me on the straight and narrow....I know it was hard...but..hey...dont you think now....it was so worth it...but I degress......I dont even OWN an APPLE product for that very reason......EVERYONE HAS ONE....I'm not following that damn crowd.
Your explanation of your time in Washington PROVES why the TRUMPSTER Will create his own media empire...that will...hopefully CRUSH this SICK, bastardly, monotonous sh$%^& show of media....they want THE NARRATIVE....the actual story or news be damned.
I heard some talking head today say that the invasion and window breaking at the Capitol started even before Trump had finished his speech....hum...hum....I haven't validated that...on my own....but if true....CRUSHES the narrative...already fed to the millions.
My biggest frustration...ha...there are many...but...literally...my biggest...is that people are LEMMINGS......very very few have the courage and the backbone..to step outside the comfort and security of the masses.....and to THINK FOR THEMSELVES....in the LEAST....AT LEAST..... we can give that to Lin Wood......now...THAT is a man who BLAZES his OWN PATH....AND MOWS DOWN anyone in his way.....as....he is the kind of person I...generally...am attracted to.......time will tell if he is right.....but...DAMN.....at least the guy has tremendous backbone and stamina...and can...gracefully.....REST IN THE LORD....wouldn't it be just....THE BEST.....if his words were all correct....albeit...Lin can get overly dramatic and excited....but...at least....his words could....could.....could....ring TRUE.....LORD...... LET THEM BE SO....!!!!!!!!!
Reactions: Nonnie, LVBurns and Lady Patriot
Share:
Facebook Reddit Email Share Link