Merkel: "No End In Sight Until World Is Vaccinated"

It's been a little more than one year since the globalists have been reshaping our lives after the outbreak of COVID-19. Even with collapsing global infections and herd immunity that may be around the corner, elites are still desperately attempting to fearmonger people to justify additional rounds of stimulus and worldwide vaccinations as this 'crisis' is definitely not being wasted.

The latest fearmongering comes from German Chancellor Angela Merkel, who was quoted by Reuters on Friday after a meeting with G7 leaders. She said:

"I stressed in my intervention that the pandemic is not over until all people in the world have been vaccinated."
Click to expand...

"The change of government in the United States of America, in particular, has strengthened multilateralism," she said.
Click to expand...

Within the Biden administration, there's been consistent fearmongering from top officials despite the drastic improvement since the inauguration. That appears particularly evident with White House coronavirus advisor Dr. Anthony Fauci who gave a new prediction last week that the pandemic might not end until 2022. Fauci has also frightened Americans into "double-masking" for added protection against the infection.

On Tuesday, President Biden told Americans at a CNN Town Hall that some form of normality to life could be coming as soon as "Christmas."

But while Western leaders continue to put the fear of god into tens of millions of people, there appears to be some light at the end of the pandemic tunnel as soon as this spring.

Johns Hopkins surgeon, Dr. Marty Makary, penned an op-ed in the WSJ on Thursday, explaining how herd immunity could be observed by April.


"...the consistent and rapid decline in daily cases since Jan. 8 can be explained only by natural immunity. Behavior didn't suddenly improve over the holidays; Americans traveled more over Christmas than they had since March. Vaccines also don't explain the steep decline in January. Vaccination rates were low and they take weeks to kick in."
Click to expand...

Taking a look at global COVID-19 cases daily change on a 7-day average, the worst of the pandemic might have peaked in January. 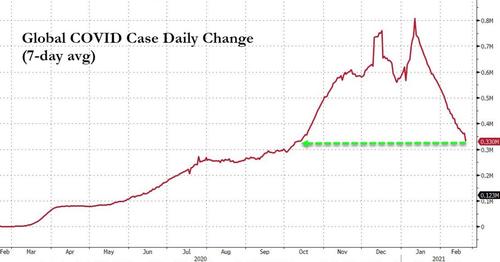 In the US, infections, hospitalizations, and deaths appear to have also topped last month and are utterly collapsing... 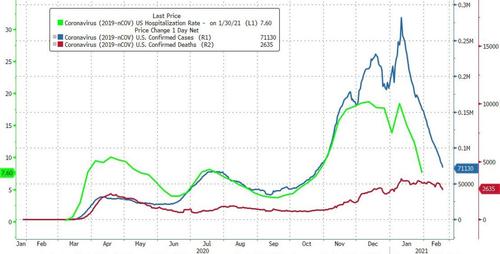 Critically, as we detailed previously, Makary explains the recent plunge in cases, hospitalizations, and deaths is not policy-related (no matter how much the politicians and their media lackeys push that narrative):

"...the consistent and rapid decline in daily cases since Jan. 8 can be explained only by natural immunity. Behavior didn’t suddenly improve over the holidays; Americans traveled more over Christmas than they had since March. Vaccines also don’t explain the steep decline in January. Vaccination rates were low and they take weeks to kick in."
Click to expand...

While herd immunity could just be a few months away, Western leaders and their media outlets continue to push scary virus narratives - of course - there's a reason behind this madness - that is - not just to continue justifying reckless money printing but also continue to seize more power and control over the populace.

Some blue states in the US, who have been very strict with virus restrictions, are beginning to reject the Biden administration's latest set of measures as they ease draconian restrictions (like Florida did all along to no detriment) as residents finally start thinking for themselves, and in the case of California, demand the Governor's recall.

The worst of the scaremongering comes not just from Western leaders but billionaire vaccine pusher Bill Gates who advocates for lockdowns, masks, and social distancing well into 2022... and a complete "change to every aspect of the economy."

Merkel's comments - amid the 'science' showing the pandemic's collapse - merely serve to confirm there is a globalist agenda to fulfill. Their only way to complete it is through consistent fearmongering (new mutant, much more deadly and infectious variants).