MSNBC Analyst: Democrats Should Call ALL Republicans Terrorists — And You ‘Can’t Negotiate With Terrorists’

A political analyst from MSNBC is calling on Democrats to proclaim that ALL Republicans are Terrorists and that they should refuse to negotiate, legislate or work with them.

Discussing Greene, anchor Nicolle Wallace said, “This isn’t even about views. She’s a conspiracy theorist, committed the very same kinds of disinformation act that today the Department of Homeland Security warned against, in almost an unprecedented bulletin. She is what they are describing in the Homeland Security Department’s bulletin about the world views of potentially violent extremists who represent domestic terrorism. Those are the views that this congresswoman has.”

She continued, “I think what is revealed by the Senate vote this week, with 45 Republicans to not even hold a trial for the president who incited the insurrection, who had all of them had all of them hiding in their own offices with the furniture pushed up again the doors. What were they hiding for? If Donald Trump hadn’t incited a violent insurrection that they were scared about. Why weren’t they roaming the halls? If they weren’t afraid, why were they in offices with furniture pushed up against a door? And my only point about the opportunity that Democrats have is that they have today, this bulletin describes the threat, they describe the world view of the people who right now and through the end of April, in the views of the people at the Department of Homeland Security, the world view is the same word view as the views publicly espoused by the QAnon member of Congress.”

Johnson said, “If that community if Georgia wants this crazed conspiracy theorist to represent them, that’s their right, but the Republican Party doesn’t have supporter her. They don’t have to put her on committees, take money away from her, they can criticize her, but they are not.”
He continued, “They know that they have a violent terrorist organization that’s supported by their ideology. They try to pretend it’s not the case. So the Democrats —this is a job for Jamie Harrison — the Democrats have to tie not just every single person in this party to these issues, but show people the dramatic and negative consequences. We lost days of Congress where they could have been working.”

He continued, “AOC mentioned in interviews after the insurrection that she didn’t want to shelter in place with fellow Republicans, because she was legitimately concerned that they may rather out, that they may tell some of the terrorists where she was hiding. So when you have members of the Republican Party who are seen as being in lockstep with a terrorist organization, the Democrats have to stop saying — it’s above and beyond unity — they have to say these people are terrorists and don’t want to govern. We don’t negotiate with terrorists.”

He added, “The first Democrat that says that is the person who should be the leader of the messages for the party for the next 18 months. You can’t negotiate, you can’t legislate, and you can’t work with terrorists.” 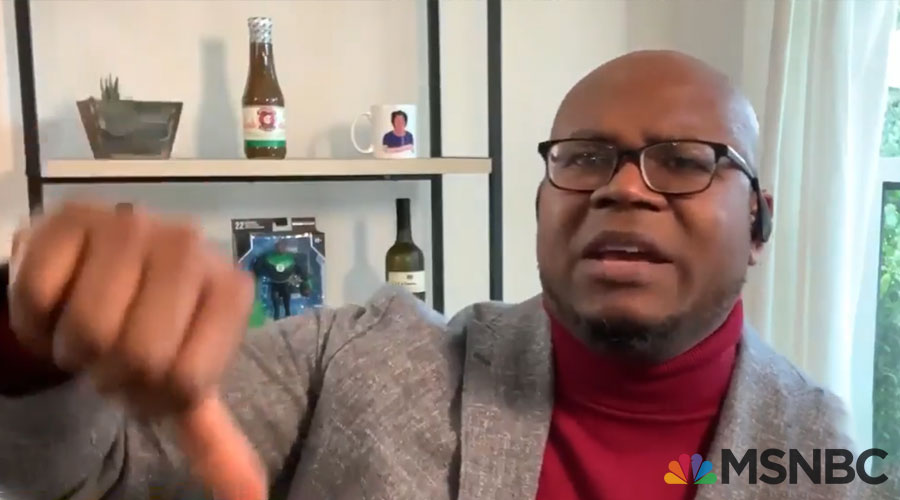 MSNBC Analyst: Democrats Should Call ALL Republicans Terrorists — And You ‘Can’t Negotiate With Terrorists’

A political analyst from MSNBC is calling on Democrats to proclaim that ALL Republicans are Terrorists and that they should refuse to negotiate, legislate or work with them. Breitbart reported MSNBC political analyst Jason Johnson said Wednesday

I thought they were already doing this?

So what they are trying/going to do is push and push and brainwash everyone, which will take awhile, to think how bad it is to be on the right side so that everyone swings to the left side, their side and only ever vote for the party these commie poopbags want. Nice play, but not all us will fall for it. Gotta brainwash those illegals too, when they enter.
Share:
Facebook Reddit Email Share Link