Troops to remain in D.C. until Trumps trial is finished... 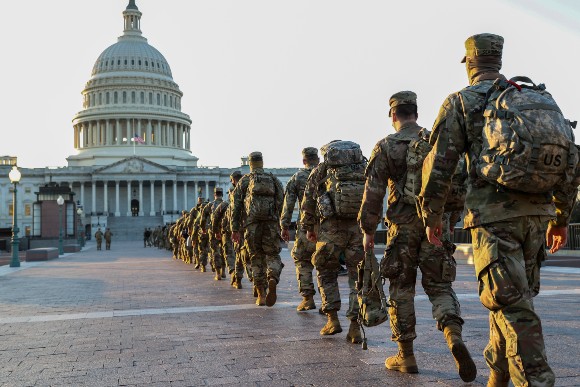 National Guard will stay in Washington though March due to Trump impeachment trial: report

With the former president’s Senate trial set to begin Feb. 8, the Pentagon is reportedly concerned about the possibility of mass demonstrations in the city.
Up to 5,000 troops will remain in the nation's capital through mid-March, the news outlet reported. The Guard was previously deployed following Jan. 6’s deadly riots by pro-Trump mobs seeking to overturn the results of the 2020 election.

Guard members, meanwhile, have taken exception to what they say is an unclear mission.
“Quite frankly this is not a ‘combat zone,’ so combat conditions shouldn’t apply,” an Afghanistan veteran currently deployed to the capital told Politico.
Rank-and-file Guard members have not been given an official justification for their continued presence, two members said.
“There is no defined situation, or mission statement … This is very unusual for any military mission,” one member added. “We are usually given a situation, with defined mission perimeters, and at least a tentative plan on how to execute those objectives.”

The Pentagon will keep around 7,000 Guard members as riot security in the city through early February and remove about 2,000 by the beginning of the trial, according to Politico. Another Guard member told the news outlet that the Guard was “not going to allow any surprises.” Approximately 25,000 troops were in the city for the ultimately incident-free inauguration of President Biden.
There are also security concerns around March 4, when some adherents of the far-right QAnon conspiracy theory hold out hope Trump will be inaugurated for a second term.
The Hill has reached out to the Pentagon for comment.