Trump lays out six big promises for a second-term agenda

It barely got covered amidst a tumultuous week of news, but President Trump has laid out a six-point agenda if he is elected to a second term that ranges from conquering the coronavirus to launching a critical-supply manufacturing renaissance in America.

The president's ambitious plan was delivered during a visit to a Whirlpool plant in Ohio last week but got overshadowed by such events as a tragic blast in Lebanon and contentious congressional hearings.

"I'm making our incredible workers six more promises that I will keep over the next four years," Trump told the Whirlpool crowd after laying out the accomplishments of his first term that included replacing the NAFTA trade deal with a new compact with Canada and Mexico.

Here are the six promises the president said will comprise his pro-worker agenda if he wins in November:

Defeat the coronavirus with vaccines and other treatment

"We are working very, very hard. We call it the China virus. …We are attacking the virus from every angle, and through this aggressive strategy we will win the war, and it will happen sooner than people think," he said. "We're developing a bounty of therapies such as remdesivir, dexamethasone, antibody treatments, the antibody treatments are really working out well, really well.

"And many more that have allowed us to reduce mortality by 85% since April. Under Operation Warp Speed, vaccines are already in the final stage of clinical trials, and we'll have a vaccine very soon, I hope long before the end of the year."

Trump also noted his administration has "dramatically increased our domestic production of personal protective equipment such as N95 respirators, gowns and gloves. We've got factories now all over the United States making these products, and we've developed the most advanced testing system on earth."

Reviving the economy from the pandemic slowdown

The president made clear he will make economic growth a top priority, revving jobs and manufacturing to the levels they were before the pandemic and going even further to build prosperity.

"We will rise from the current adversity of this horrible invisible enemy, and we will be more prosperous and resilient than ever before," he told the workers. "We have done things that we never knew we could do.

"We are building factories now. We are building plants. You'll see what's going to be happening with the job numbers very soon. We had two of the best months ever in the history of our country, and we are going to have many, many very, very successful years, unless somebody comes along and destroys it by doubling, tripling and quadrupling your taxes, and quadrupling something else called regulations."

​
Trump has already announced with New York Gov. Andrew Cuomo a plan to have Kodak in Rochester, N.Y. retool and expand its factory to transition from photo products to pharmaceuticals. But he says that's just the beginning of a larger effort to insource drug and medical equipment manufacturing.

"As we have seen in this pandemic, the United States must produce essential equipment and supplies and pharmaceuticals for ourselves," he said. "We cannot rely on China and other nations across the globe that could one day deny us products in a time of need. We can't do it."

"During the course of the next four years," he added, "we will bring our pharmaceutical and medical supply chains home. We're going to bring them home where they belong. We'll end reliance on China just like we did with the washers and dryers."

Trump also touted his plan for "favored nations" under which the United States gives preference to allies who make cheaper, safe drugs that can lower costs for American patients.

​
The president also noted he has signed a new executive order that ensures "we buy American" when it comes to essential medicines.

"The executive order will require that U.S. government agencies purchase all essential medicines that we need from American sources,” he explained. "The executive order will also sweep away unnecessary regulatory barriers to domestic pharmaceutical production and support advanced manufacturing processes that will keep our drug prices low and allow American companies to compete on the world stage."

This has been a theme since Trump first hit the campaign trail back in 2015, but last week at the Whirlpool event he extended his plan with ambitious new goals and identifying the industries he imagines will grow.

"Here's my fourth promise to American workers: Beyond our medical supply chains, over the next four years, we will onshore millions of new manufacturing jobs across many other critical sectors that are vital to our national security and prosperity — from electronics to machine tools to shipping, aerospace, autos, and of course to iron and to steel," he explained.

Trump made clear he will continue to use tariffs and new trade agreements to force American companies that sent jobs overseas to bring them back home.

"My fifth promise to American workers is to bring back American jobs and factories using every tool at my disposal, including tariffs," he said. "I love properly-put-on tariffs because they bring unfair competitors from foreign countries to do whatever you want them to do.”

Trump also cited other tools he plans to use, including "countervailing duties, and new trade deals based on the principle of fairness and reciprocity."

​
Trump said his final promise was to protect American workers from unfair practices and bad decisions, citing his decision last week to fire the head of the Tennessee Valley Authority, a quasi-governmental power utility. The fired chairman was paying himself $8 million a year while sourcing jobs overseas.

"The Tennessee Valley Authority pays $8 million a year to the head. And after the Authority laid off 20% of its American technology workforce and forced them to train their foreign replacements this week, I told the chairman of the board, 'You're fired,'" he said.

"And firings will continue unless the layoffs are reversed and the American workers are rehired," he added. 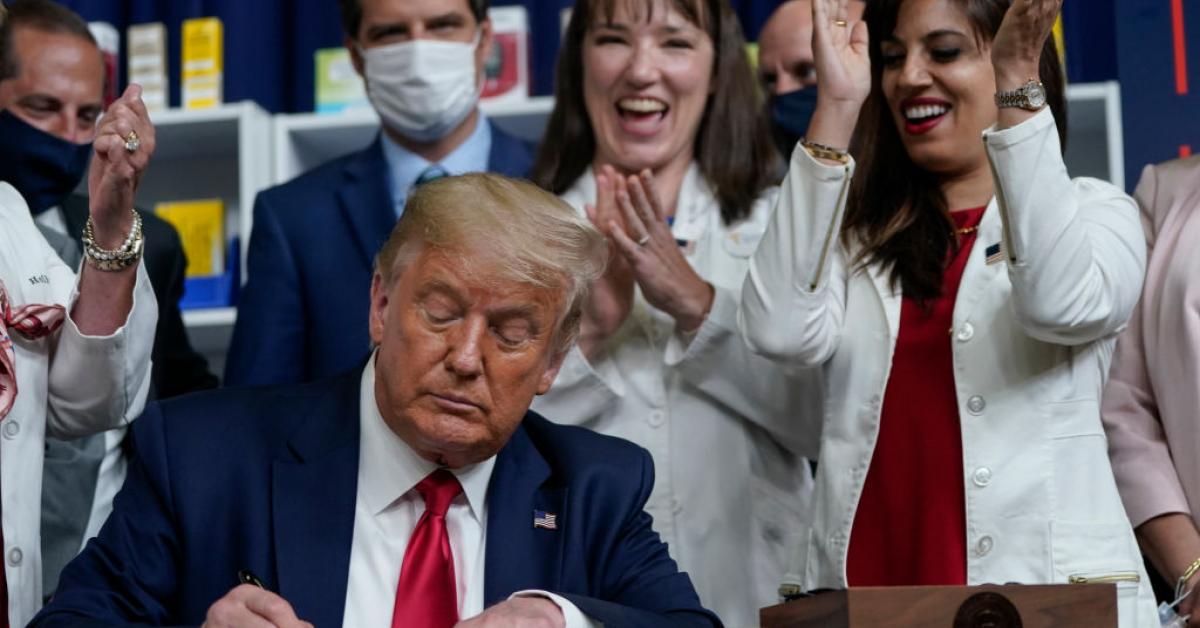 Trump lays out six big promises for a second-term agenda